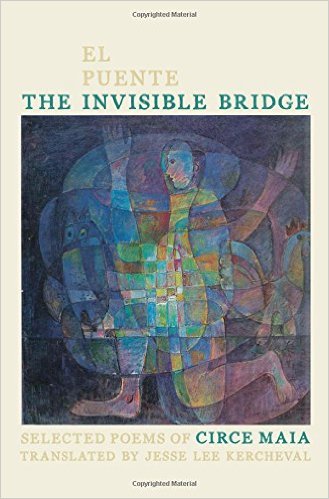 The Invisible Bridge is the first book of poetry by celebrated Uruguayan poet Circe Maia to appear in an English-language translation. Maia has published ten books of poems since 1958 and and the poems in this bilingual collection cross the breadth of her work, reflecting the theme indicated in the title, which derives from the first poem in the collection, “The Bridge.” This poem conveys the notion that language itself builds bridges between people. Voices leap across other voices; by speaking, people send themselves into the world and meet others, as in the poems “The Words” and “Voices in the Dining Room.”

In a manner similar to what we recognize as the Imagist tradition, Maia’s poems are written with a light, deft hand, with great attention to what can be seen objectively. That is to say, clarity of image seems prized over extended metaphor or any kind of overt philosophical musing. A poem like “Yes and No,” for example, describes clothing drying on a line—how the clothes dance, lift.

Many of these poems explore the natural world around Maia’s native town of Tacuarembó, in northern Uruguay. Political and social turmoil are also subjects, though never explicitly so. Translator Jesse Lee Kercheval calls Maia’s work “subtly, but powerfully, political.” And in fact, the poem “Por detrás de mi voz” (“Behind My Voice”) was set to music and sung as a Latin American anthem against military regimes, while the poem “The End” was written during the military dictatorship that jailed Maia’s husband—though the casual reader might never catch the connection in the poem’s sparse lines about light’s reluctance to fade.

A key figure in the Uruguay literary landscape, Maia won the Delmira Agustini Medal of Art and Culture in 2013, and has also worked as a teacher and translator. Kercheval’s translations of her work recreate the image-driven quality of the poems, with a subtlety in the English that leaves interpretation just as open to the reader as the original poems in the Spanish. She chooses simple but striking verbs of motion—throbs, slid, creak, yield—and maintains similar line lengths and punctuation, keeping Maia’s line breaks wherever possible, even at times teaching English readers to be more accommodating of Spanish syntax with lines like “Toward unknown others, go replies” or “through them escapes light,” which use inverted English syntax.

Kercheval occasionally makes choices that remind English readers of the subject of the Spanish lines, which, when dominated by long sentences, can lose their driving force for an English reader. But even these choices are made very much in keeping with Maia’s concerns—to add the subject “light” back into the final stanza of “The End,” whereas the word luz does not appear in the English, is to remind readers of one of Maia’s consistent motifs.

Kercheval and Maia worked closely for more than ten years to translate Maia’s work. In reading The Invisible Bridge / El Puente Invisible, one feels this closeness, and there is the security—if it may be called that—of knowing that Kercheval is intimate with Maia’s history, place, and person. If the translator’s job is to see as the poet saw, Kercheval does just that. Maia’s words, her invisible bridge, are handled lovingly.

Kelsi Vanada has an MFA in poetry from the Iowa Writers’ Workshop and is currently working on an MFA in literary translation at Iowa. She is a graduate assistant with the International Writing Program and a former teaching assistant in creative writing and general education literature. She translates from Spanish and the Scandinavian languages, and was recently named a 2016 ALTA Travel Fellow.