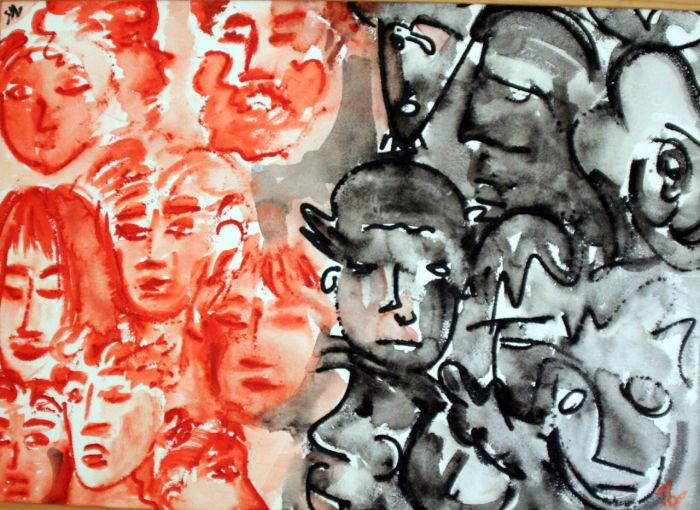 Christina MacSweeney is a literary translator specializing in Latin American fiction. Her translations of Valeria Luiselli’s Faces in the Crowd, Sidewalks and The Story of My Teeth were published by Granta and Coffee House Press in 2012 and 2013 and 2015 respectively; Faces in the Crowd was a finalist for the Best Translated Book Award, 2015. Her work has also appeared on a variety of platforms, including Granta Online, Words without Borders, McSweeney’s, Quarterly Conversation and Litro Magazine, and in the anthology México20 (Pushkin Press, 2015). She also contributed an introductory text on Mexican literature in translation for the LBF Market Focus Guide, 2015. Editor Sarah Viren interviewed her for M-Dash.

M—: First I just want to say how much I admire your translations of Valeria Luiselli’s books Faces in the Crowd and Sidewalks. And I’m super excited to read The Story of My Teeth when it comes out in the States in September.

Christina MacSweeney: Thanks, Sarah. The Story of My Teeth was a very interesting book to work on and Coffee House Press has produced a beautiful edition, so I’m excited about it, too.

M—: Can you tell me a little bit about how you discovered Luiselli’s work and how you ended up publishing translations of three of her books over the past few years?

CM: Valeria was a very new voice at that time, and it was the publisher, Granta, who approached me with a request to report on Los ingrávidos (the Spanish title of Faces in the Crowd). I was completely blown away by Valeria’s writing—it seems to break all the rules, and yet is absolutely clear—so I sent off a glowing report, offered to produce a sample translation; in fact, did everything short of getting down on my knees and begging them to let me translate the novel. And when Granta also sent me Papeles Falsos (Sidewalks) to read, it seemed to speak so directly to me that I think I would have just turned over and died if I hadn’t had the chance to translate it. The rest is history.

M—: I read that you’ve had a really collaborative relationship with Luiselli, at least in that neither of you seems wedded to the notion that the text in its original form should or could be duplicated in its translated form. Can you describe what the translation process has been like for her books?

CM: Each book has been slightly different because of the situations in which the translations have been made, but Valeria and I have collaborated very closely on all of them. For Faces in the Crowd, Valeria wanted to use the translation to make revisions to the original, so I made a draft translation and, as she’s bilingual, she used that as a springboard. Valeria told me about what she’d been reading while writing the novel, which helped find some of the New York voices, and she also sent me video and music clips: music has always been a good way of communicating ideas for us. I’m also a very visual person—I’ve used collage as away of understanding my environment, but also of kind of gaining a deeper appreciation of texts—and Valeria sent me a link to a contemporary ballet production based on José Limón’s choreography for Purcell’s The Moor’s Pavane. I know that animated certain scenes in Faces in the Crowd.

The translation process for The Story of My Teeth was more complex as the text started its life as a story to accompany an exhibition catalog for the Jumex Gallery in Mexico. Valeria wrote the text in installments for a reading group of the factory staff and I translated, almost simultaneously. Then when the idea was expanded into a novel, pretty much the same thing occurred, so that the Spanish fed the English version and the English fed into the Spanish.

We live in different continents so most communication is by email, but sometimes we Skype and read passages aloud. This is so helpful because it immediately highlights where the text loses its rhythm or words don’t feel natural. Just before The Teeth went in for editing, I was in New York and we spent a few wonderful afternoons sitting in cafés, reading the entire novel aloud, and making revisions. I think it was then that we started talking about the need for some sort of translator’s note or glossary, and when I had the idea for what became “The Chronologic” Valeria supported me all the way, and even suggested it should be included as a chapter in the book rather than an appendix.

M—: Do you find any difference in your approach to translating fiction versus works of creative nonfiction, like Luiselli’s essay collection Sidewalks or Magali Tercero’s “Notes on the Violence in Sinaloa, Mexico,” which you translated for Words without Borders?

CM: That’s an interesting question! In some senses, there’s no difference at all: modern polyphonic fiction can encompass a variety of writing styles, including aspects of the essay and journalism. In all these cases, you’re trying to find the voices, catch the rhythm and music of the text. Sidewalks, of course, has a single essay-voice, so maintaining continuity was the consideration there, but I also had to weave in references to or quotations from the sources Valeria draws on. Research is particularly important when translating essays; you have to get your head around the ideas the author is trying to express, and be aware of where those ideas come from.

Perhaps the greatest difference is when you’re dealing with issues of human rights and social injustice, as in Magali Tercero’s article, because your responsibility as a translator is to very real people whose very real lives could be endangered by the publication of their words or thoughts. But that’s not to say that literary fiction can’t address these issues; it often does, but less overtly.

M—: We don’t have as many essays collections in translation, especially not from Latin America, but I wonder if you see that as something that might change. Mexico, at least, has a strong essay tradition, but many of the most well known essayists from there have yet to be translated into English.

CM: Yes. I think the essay in general is a greatly undervalued genre, but, as you say, one that is very important in Latin America; for example, I’m reading a brilliant long essay at the moment by Luigi Amara (Historia descabellada de la peluca), which is a fascinating, witty, thought-provoking treatise on the wig as a social phenomenon. It’s also quite strange that while the essay seems to be declining in literature in English, many of the Latin American essayists draw on the work of earlier English-language essayists like Chesterton for inspiration.

It’s hard to say if translated essays will gain greater prominence in the future: the English-language market for translations is so restricted, and publishers tend to be cautious about taking on works that can’t be fitted into a relatively mainstream category (the bookstore on the university campus where I work has no shelf space dedicated specifically to essays). Perhaps what we need are more platforms dedicated to the essay as an art form.

M—: I probably should have opened with this question, but can you tell me a little bit about how you got started as a translator?

CM: I suppose like most literary translators, I started out as an insatiable reader. During the time I was living in Caracas, I read much more Latin American writing in the original Spanish and began to understand that there were enormous gaps in my knowledge of that literature. There was also a crazy moment when I started writing letters to friends in the style of the authors I was reading (my Manuel Puig period must have been a great strain on those friendships!). Then, I began translating short stories by Silvina Ocampo, just because I was fascinated by her work, and translating was a way of getting deeper into it.

When I finally returned to UK, I did a master’s in Literary Translation at the University of East Anglia, which was a wonderful experience and also put me in touch with the literary translation community. And then there were some tough years when I was trying to gain some recognition as a translator, publishing in on-line sites and trying to interest editors in the authors I felt were being neglected. Faces in the Crowd was my first full-length translation to be published, so I’m obviously very grateful to Granta for taking a chance on me. This year’s London Book Fair, with Mexico as its market-focus country, was also an important moment in my career. It was so stimulating to be able to listen to and meet many of the most exciting contemporary Mexican authors, and have the chance to talk about what I do with like-minded people.

M—: And what are you working on now?

CM: I’ve recently finished the translation of a novel by another amazing young Mexican writer, Daniel Saldaña París, and we’re in the editing process now and the book (Among Strange Victims) will be published by Coffee House Press next spring. Daniel and I have also been accepted for a residency at Ledig House in November, so we’re both excited about the chance for face-to-face interaction. And now I’m working on a satirical novel by the great Eduardo Rabasa, who some readers may know as the editor of the Mexican publishing house Sexto Piso. It’s a challenge to translate the at-times acid humor and colloquial language, but I’m having great fun doing it. The provisional title is A Zero Sum Game and it will be published by Deep Vellum in 2016.

M—: Any recommendations for books in Spanish (or in translation) you think we should read?

CM: Ughh. How much time do you have? Anything by Alejando Zambra, Guadalupe Nettel, Álvaro Enrigue… I recently read a great collection of short stories by Laia Jufresa and I love Julián Herbert’s work: it would be amazing to see this in translation. Another author who is, incredibly, not available in English-language translation is Venezuela’s Victoria de Stefano: a translation I made of an extract from her novel Historias de la marcha a pie (Stories from the Foot March) is going to be included in an anthology published by Ragpicker Press, so I’m hoping that will spark some interest.

a crossing over. an exchange. a removal. an addition. a destruction. a replacement. a building. a violation. a transformation. an in-between. a movement. a book. an EM DASH.