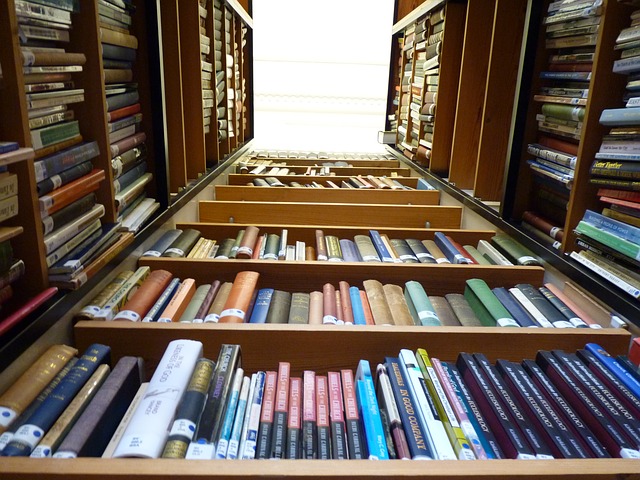 ON RETURNING A BOOK TO A PUBLIC LIBRARY

I’ll make this short. Days always surprise me.
So when I’m returning a book to a library
it doesn’t mean I’ve finished it or had no
intention of reading on. It only means that
despite its renewal the library’s lease has
expired and that the times and places and
extravagant fortunes of men, with the traditions
of various schools and institutions of knowledge,
secret societies and writings of all ages,
collected and arranged into chapters

or classified according to their alphabetical
order, have found themselves locked behind
the doors of inscrutable hallways, keys flung
away as carelessly as if they were dandelion
seeds. No doubt they will go on along
the corridors of some cerebral Hades weaving
their lives quite independent of those that
time and again I capture in my glimpses
scattered or overheard in chunks of
fragmented conversation, however inadequate.

So, in the cobwebs of Saint Petersburg’s
Railway Station (in snow) Madame Karenina
still waits to throw herself under a train.
And I’ll probably never find out what Vronsky
could have done at the time, if anything.
Tatiana never finished her letter, though I presume
she had turned down the poet, who ages ago,
in his small neat hand, had been scribbling
in his notebook the names of his lovers.
And doctor Rieux, even he—what did he,

after the danger had passed, say to a writer
whose fast travelling ladies clattered around
Bois de Boulogne in their carriages—if indeed
he survived the ordeal? Is this important?
I don’t know; take the book I was bringing
back this afternoon. I can’t for the life of me
remember who wrote it; even his middle name,
a common and well-known one, evades me
completely. A tiny collection of verse, like
scenes of renaissance architecture and its triangles

and elegant stairways in precise, condensed
light, the color of salt. It was a book of
poems which now, when forgotten, seem even
better, compact in the language of vague,
unruly translation, opening new and unexpected
prospects on each of its metaphors—sharp and
twofold—like “pillars” and “horse.” There was an air
of something conquering, victorious in far away
places about them, like a clang of a sword drawn
from a scabbard: Vincente Cortázar Paladio.

We stood in front of a building
no different from the one on
the other side. Yet entering it,
we found our bodies gone;
viewed from back home they
would have looked like strings
of Italian spaghetti, stretching
over the Milky Way.

A few more unpleasant things:
we were struck by the same
question at the same time, i.e.
is our present position a physical
fact or just the result of an operation
within a pure thought experiment?

As we entered the building, the time
pointers showed us in different
directions, but we went up in an
elevator. It stopped in front of an
empty room with a dimmed mirror
inscribed “Museum of Causality.”
It was obvious there had been
no one there for a long time.

We stepped out onto a terrace,
but it allowed us no view worth
a mention. A surly caretaker
was busy, hastily sweeping
lost memories under a rug,
much to our amazement leaving
ours untouched. He left us with
our sick mothers, with our
uncertain offspring, with our
own unstable childhood.

When he turned his back
on us his back read Carry on
as if I’m not here. There
were other signs, though,
like the smell of iodine on
a deserted beach or echoes
of interpolated sentences
as after a storm, as well as
a firm conviction we were
in a big city. Yet it was
anyone’s guess where they’d
come from, or if there was more
to them than just a superficial
exchange of ideas. Rain.

We were aware of our
free will but we had our backs
pressed against the wall:
try to explain to an apple falling down
a steep slope—whose free will
is to turn round in the air
and float back to its branch—
the extent of the notion.

What finally left us in no doubt
was the lower floor scene
with the Creator, beleaguered
on all sides and brought before
the tribunal (which, technically
speaking, was an Inquisition),
absently answering for
himself “Eppur si muove.”
And ever since, one is obliged
to express oneself on almost
anything in metaphoric terms,
the sensation that we were

a rainbow from the two
time-bent banks of the river.

I watch them on television; they also show the breaks
between the musical pieces, sometimes. Now
and then I can see a latecomer arriving.
A friendly young lady in black
and red shows him
to an empty
seat.
The latecomer is embarrassed, he is aware of his back being
shown in the homes of the dwindling number
of viewers. His back feels under attack,
but such friendly accompaniment
is not something you
reckon with
even
on the happiest of evenings: Samuel Barber, Adagio—
music that the death of statesmen has made
indispensable at funerals. I used to go to
concerts every week, Albinoni,
Mahler, Barber, in that
order. That was
another
concert hall, another world, no uniformed attendants,
no concert programs looking like commercial
catalogues, but with a splendid
orchestra, nonetheless.
I was late most
of the time.
I ran
across the park, unbolted the heavy door, struggled up
the stairs past the cloak-room and stood in front
of the part-open door to the balcony.
Outside there was a mild
spring evening
breathing
on
my brow, or a sharp winter night and onto them were
beginning to get caught the sounds of some
deeper evenings (and nights)
lived through by the lake,
in the small
pavilion
by
the end of a pier with no mosquitoes to intrude on
the composer’s sadness—the sadness of
some other composer. I would lean
on the door-frame, absorbed
in my own evening,
in my own
sadness
(third such in succession), properly made up from
waves, from the rustle of the pines, from
far off music from the dance floor;
the two musics blended,
becoming a single
one, scented
with pine,
splashing on the rocks, running out the same into silence,
into applause and coughing. My moment has come,
I push open the door and almost invisible I go into
the concert hall. A nod from my professor
of Philosophy, no longer with us.
A little farther forward
sits my professor
of Literature,
no longer
with us.
Now when I see them I myself am no longer there.
I disappear in a moment, but fading out
slowly into darkness like
the scenes in old
films. No more
concert
halls,
no musicians. The evenings have died away,
the nights, too. What constitutes
our existence, what sort of
continuity, when things
end so finally—once,
twice, three
times?

Marjan Strojan has published six books of poetry and many translations, including Beowulf (MK, 1992), and works from such authors as James Joyce, Robert Frost, John Milton, and Geoffrey Chaucer. In 1997, he edited and in great part translated the first comprehensive anthology of English poetry in Slovene language (Antologija angleške poezije, CZ, 1997). His last work, Songs from Plays (Pesmi iz iger), a volume of variations on Shakespeare’s stage poetry, is to appear in 2016. Strojan’s collection, Dells and Hallows will be published by Autumn Hill Books this Fall.